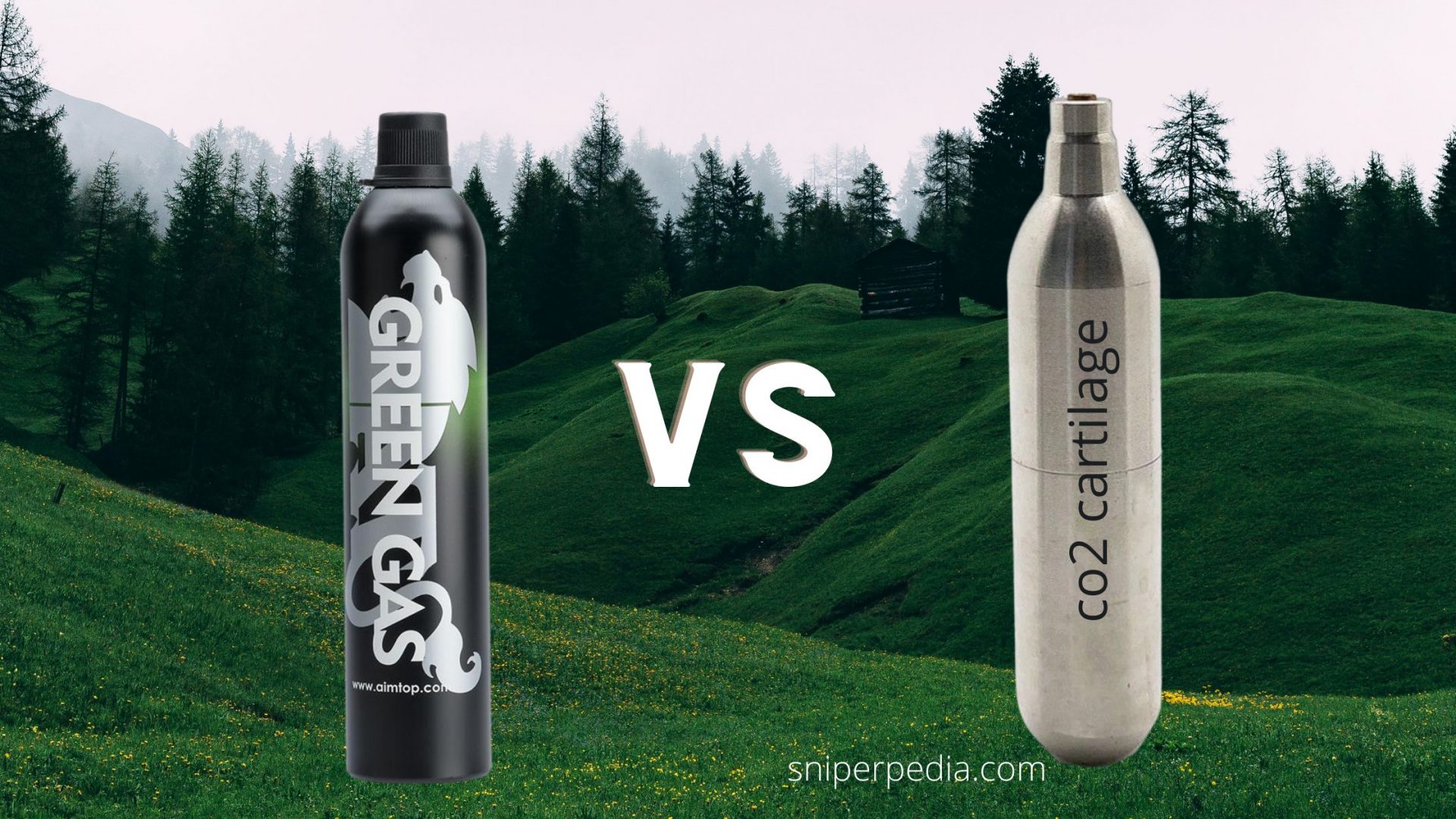 When it comes to getting a weapon to use, there are a lot of options. Among the numerous factors to consider, such as which airsoft sniper rifle feels better in your hand or which is more accurate, there is the issue of propellant.

This is one of the most important factors to consider while making decision regarding Airsoft sniper rifles. The type of gas you want to utilize depends upon your preferences. We are here to help you to make this decision easy in a logical manner.

There are three types of Airsoft sniper rifles in common, one of them is gas guns. Gas guns are preferred over AEG or spring-powered guns. There are multiple reasons for that, some of them are listed here.

Gas-powered weapons provide extremely realistic-looking and working firearms, which may be a significant appeal for milsim or re-enactment enthusiasts. Gas-powered weapons, like their electric equivalents, maybe semi-automatic or fully automatic, giving them an edge over single-shot springers.

In airsoft, CO2 is used as a propellant, to power up sniper rifles and other weapons.

CO2 gas is pressurized carbon dioxide that is generally stored in a 12-gram canister. The CO2 gas canister is the size of your thumb. This canister is inserted in the magazine of your gun. The gas has a 30-50 shot range per cartridge, which may seem insufficient to certain shooters but the shot from a CO2 gas pistol has a lot of force.

What Is Green Gas?

Green gas is used by the shooters as it is affordable. It is generally delivered in a bottle, which is subsequently inserted into the magazine via an adapter. The magazine is instantly loaded with green gas. This allows you to fire more rounds than when using CO2, but it also means that your gun’s functioning is compromised in cold weather. Green gas is considerably gentler on the gun and acts as a lubricant when bullets are fired, ensuring that the gun lasts a long time and reducing the need for frequent maintenance.

Both the gases are very similar to each other but some points of distinction are listed below:

⦁        CO2 weapons can shoot at a steady velocity for an extended period of time without having much of a ‘cool down’ effect. On the other hand, after a series of rapid shots, green gas undergoes a ‘cool-down effect.

⦁        CO2 gas tanks are available in a variety of sizes, allowing for convenient refilling during games while green gas is typically delivered in larger, less mobile canisters.

Remember the cool-down effect occurs when the gas and magazine get cold as a result of the frequent shooting, lowering the gun’s power.

I prefer using green gas while playing airsoft because it is affordable and green gas lasts in longer matches.

Propane is a colorless gas that does not have the silicone lubricant that keeps the gun lubricated. Propane has a sulphurous odor and most shooters find it unpleasant. Although it is less expensive than Green gas, the absence of lubrication causes your gun to wear out faster. In addition, it has a higher pressure than ordinary Green gas.

It is the least expensive of the gas alternatives, but it has disadvantages. To fill your magazine with propane, you may need to purchase additional equipment such as an adapter. You may also need to purchase silicone oil to keep your handgun oiled, as ordinary propane gas will not mix with it and will harm your weapon if it is not properly lubricated.

Because of the changes required and the risk of destroying my airsoft gun, I prefer not to use propane.

Red gas is classified as a chlorofluorocarbon, which is it contributes to the ozone layer’s depletion. However, the United States and a number of other nations have outlawed it. Red gas was created to compensate for the inadequacies that other gases had in a colder atmosphere.

The gun’s mechanism would not slow down in a cold environment while using red gas. The red gas has an incredibly high fps (fire per second) under typical conditions, which would substantially increase the wear on your rifle.

Only a few weapons can handle the kick that black gas delivers since it is the highest-pressured gas accessible.

The pressure from this gas is capable of destroying most airsoft weapons after just a few minutes of usage, and it may cause physical damage to the opponent if hit. Black gas is a great choice in cold environments.

Overall, using black gas while playing airsoft is not recommended because it can harm both your gun and your opponents.

Compressed air, known as duster gas, can be used to clean electrical equipment that cannot be cleaned with water.

This is a cheap and effective green gas variation that has a very mild kick that puts little to no strain on your gun’s internals.

You have to consider some points while answering this question. The answer depends upon the following conditions

Due to its quick shooting rate and high FPS, a CO2 gun may be a preferable alternative while playing a fast-paced and high-pressure game. CO2 also outperforms Green gas in cold settings because it is kept in a canister before being placed into the magazine, whereas Green gas is stored directly in the magazine.

When playing long conservative games that demand you to preserve your gas, green gas may be a preferable alternative for the shooter.

So, it depends upon the condition you are playing the game in.

What Is Green gas made of?

Anaerobic digestion biogas, landfill gas, and biomass gasification (‘syngas’) are all sources of bio methane (sometimes known as “green gas”). By eliminating CO2, all of these gases may be transformed into bio methane.

Can Green Gas be used in CO2 Airsoft Sniper Rifles?

The answer is no for conventional airsoft weapons. The pressure from the CO2 is necessary for the blowback process because of the way CO2 weapons are constructed. Green gas pressure is insufficient to allow the cannon to function correctly. Some firearms, however, have been modified to allow this.

How Long Does a Can of Green gas Last:

Most cans of Green Gas will last about 20-30 magazine fills. You get about 1.5-2 magazines each fill of gas at ideal conditions (75-85 degrees Fahrenheit).

Electric airsoft weapons are the most often utilized by shooters. They generally include rechargeable batteries as well as a battery charger. Most electric weapons feature several selectable modes, allowing shooters to choose between full auto, semi-automatic, and single-shot modes.

⦁        CO2 guns require a constant refill of gas to function which could be expensive while electric airsoft functions on rechargeable batteries which is much cheaper.

The most popular airsoft guns are electric airsoft guns. The shooter’s preference will determine which the better of the two is. Aside from the fact that CO2 gas is more expensive to replenish, a CO2 gas pistol will appear to be a better alternative than an electric gun due to its superior range, accuracy, and FPS. An electric gun, on the other hand, has a faster trigger reaction and fire rate.

This depends upon the shooter’s choice, whether he wants a quick firing rate or power and accuracy.

There are some shooters who prefer CO2 over green gas airsoft sniper rifles. Here’s why:

The propulsive effect produced by both is different, when CO2 and Green gas airsoft sniper rifles are fired, the propulsive impact they produce is different. When CO2 is fired, it produces a forceful kick and a greater effect, but Green gas, which is created from Propane with silicone oil added, produces a gentler but still effective shot.

In the end, both Green Gas and Co2 are excellent propellants for airsoft guns, and which one you choose is mostly a matter of personal choice.