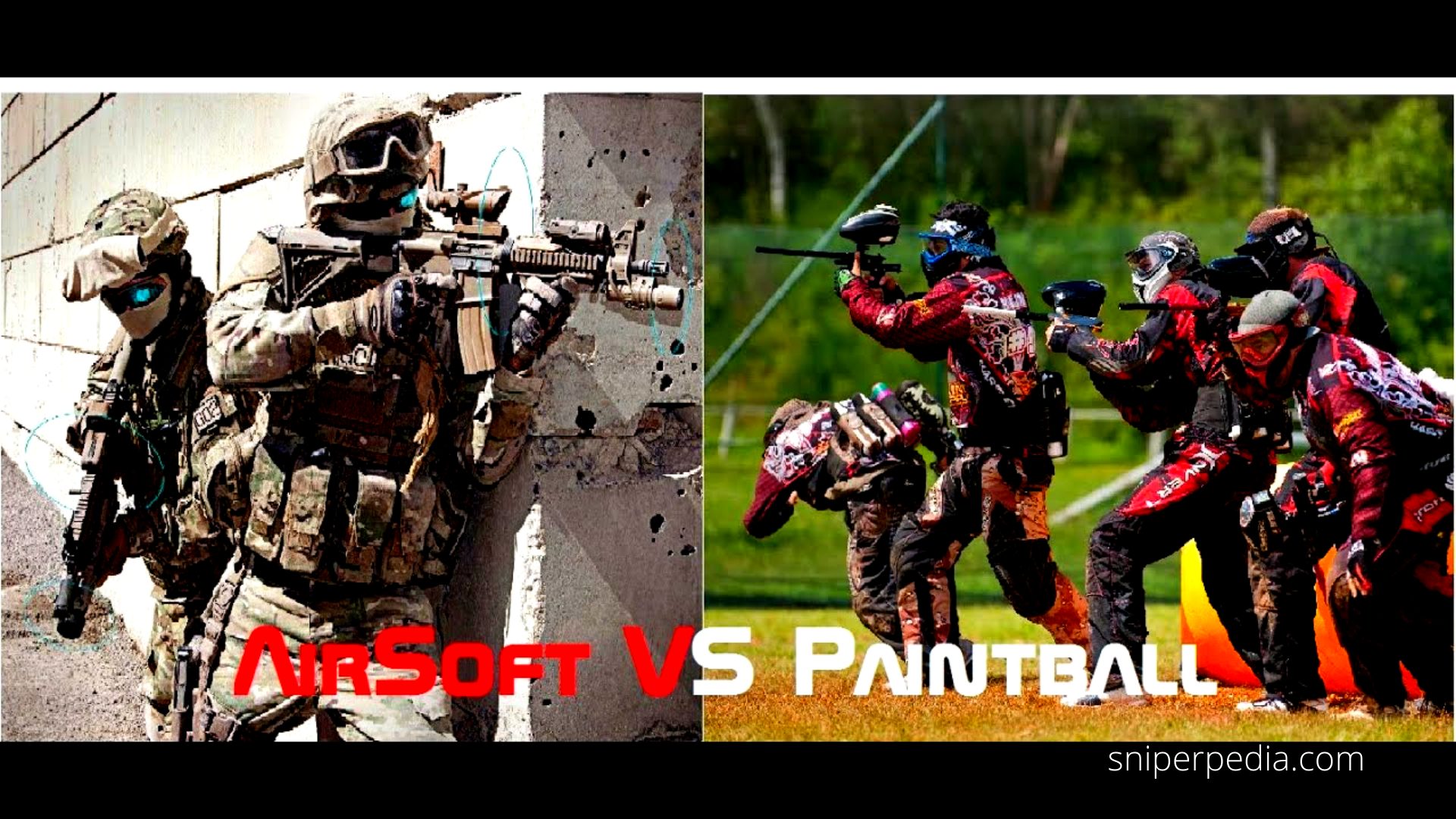 Stuck between Paintball vs. Airsoft? Don’t fret! I’ve compared these two most admiring shooting games with all pros and cons.

Of all sports, shooting games are everyone’s favorite. It is more exciting and fun to play these games. Also, the researches have revealed that shooting sports help in developing self-confidence and boosting mental processing. Also, it spikes your adrenaline level, making you feel more powerful and dominating. Are you willing to take all these advantages? If yes, then you’re at the right spot!

Newbies are often stuck in choosing the best shooting sport for them. In this sequence, I’m here to compare the two most admiring shooting games: Paintball vs. Airsoft! The theme of both games is similar, but the gear, rules, strategies, and cost varies greatly. So, let’s not wait more and dig into the discussion!

Paintball and Airsoft are shooting sports, being played for a long time. Still, players get confused while making decisions about one. It’s okay! We will discuss all details section-wise to understand in a better way. By the end, we’ll decide which one is better and why. So, let’s begin with paintball.

Paintball—a shooting sport invented in 1981 on advertisement of dye guns. The game was eventually recreated with rules and sports goods. In paintball, players can compete in teams or separately. It is a shooting game in which participants attack each other (opponents) to eliminate them from the game. The game theme is to eliminate the competitors by shooting them.

To attack the competitors, players shoot the pills holding dye inside and covered with a gelatin shell. These capsules are called paintballs. Usually, Polyethylene Glycol is used inside these balls, which is a water-soluble, non-toxic dye. Paintballs contain edible dyes which are used in food items. But I suggest you do not taste it because it’ll dry your mouth area.

There are propellers used to drive these balls known as paintball markers. The paint gun is similar to an airgun used in airsoft sports. These markers utilize compressed gas (Carbon dioxide or compressed air) to expel the paintballs. In general, the velocity of these paintball markers is 90 meters per second. The game is overall fun and enjoyable.

The paintballs deliver effortless functionality. There is no need for secondary knowledge; you’ll understand it in one go. Comparatively speaking, the paintball sport is easy and more fun than the airsoft shooting game. In this sport, you have to load the gun through pods which are packed in pod packs. Let me tell you how to load it like a pro.

How To Load A Paintball Gun?

Of course, you need to have a pod filled with paint and a paintball gun. Now, open the hopper and pour the paintballs inside it with the use of hands. Once you’ve loaded all your paintballs, you’re ready to attack. So you see how basic it is!

The paintball can be played in any area which has good space and no rush. It is usually played in speedball fields and woodland locations. I found a farmyard building great for playing paintball because it is more voluminous and engaging and will provide you with a thrilling experience.

Price is a matter of concern for budget-conscious buyers. In this way, paintball stands at a downbeat poll because it is expensive. The paintballs are not sold individually but in cases. Each case consists of approximately 2000 paintballs which are bulk. It costs you above $30 on average. If you go for good quality and fancy ones, then the price increases.

Airsoft sport is similar to paintball. It can only be played in teams. In this shooting game, players shoot the competitors to eliminate them from the team. The theme is similar to paintball shooting, but the equipment and sports gear are different in this game. In contrast, there are no visible markings on players, and hits can be invisible because it allows pellet shooting without dye.

Airsoft guns are replica toys of original weapons. These particular guns are designed to work on low power and are less penetrative than ordinary guns. It comes with low stopping power, making it safer and usable for recreational purposes. Though the weapons used in this game are harmless, players still have to wear protective gear too.

The Airsoft guns are categorized into two: mechanical and pneumatic. The machine guns are used often, working on piston-air-compression mechanisms. These are also called spring guns. Besides, the pneumatic airsoft gun operates on a valve-control mechanism. These are also known as toy GBB guns.

The sport doesn’t include an absolute bullet to eliminate opponents. In this sequence, the airsoft guns are designed to shoot non-metal spherical capsules called airsoft pellets. These pellets are usually made of plastic material or resin material. Each pellet weighs 0.1 to 0.4 gm and has a 6mm diameter.

In short, the usability of airsoft guns is complex as compared to paintballs. The reason is that the airsoft weapons have magazines that need to be winded constantly. However, I must say that usability also depends on the weapon you’ve and your skills to control it. There is no doubt that a good and compatible airsoft gun will offer superior maneuverability and be easy to carry all-around.

How To Load An Airsoft Gun?

Now the question is how to load a gun? Don’t fret! You need to understand a few steps, and you’re all ready to shoot. There are two magazines in an airsoft gun: the most common one is a high-capacity magazine. There is a trap door at the top of the mag that allows you to put the BBs in through your hand or a loader. Once you load, place the magazine in the weapon and turn the spur gear to wind BBs up. You’ll get almost 50 to 60 shots as per fully wound magazine.

You can play Airsoft at any venue. In general, people play it at RAF bases or woodland areas. In my opinion, a building like a shopping mall would be a more fun location for this shooting game because it has multiple entries or exits and floors. It would be a more exciting experience.

Playing airsoft sports instead of paintball is a cheaper option for you. The reason is that the pellets used in this game contain no expensive dyes. These are not even metallic. You can buy around 5000 BBs under $10, which is incredible. So if you’re looking for a penny-pinching offer, then Airsoft is a great recreational sport for you!

Which is safer: paintball or Airsoft?

According to a study, 64,100 airsoft injuries and 2800 paintball injuries were reported between 2006 to 2008, which shows that paintball is safer than Airsoft. However, the paintballs are heavier in weight and hurt more than BBs. In my opinion, safety depends on you, like if you don’t wear protective gear, then you’ll get hurt.

Which is stronger, Airsoft or BB?

BB weapons fire at a faster speed as compared to airsoft guns. In general, the velocity is measured as FPS, that is, feet per second. The airsoft gun rounds at 500 FPS and BB weapons rounds at 550 FPS.

No, you can’t! The metal BBs are tiny to fit in an airsoft weapon. Plus, it can mutilate the barrel of your gun, too, even if you get the right-sized metal. Please never try this.

Now that you’re aware of both the shooting games, their major and minor differences, and facts, it will be easier for you to choose one. From my standpoint, Airsoft is better because it is affordable, more realistic, not messy, and can also create a blink of interest towards a military profession in your child. In opposition, paintball is more fun, enjoyable and funky. You should try both of these recreational games to make your weekend amused and gratified!