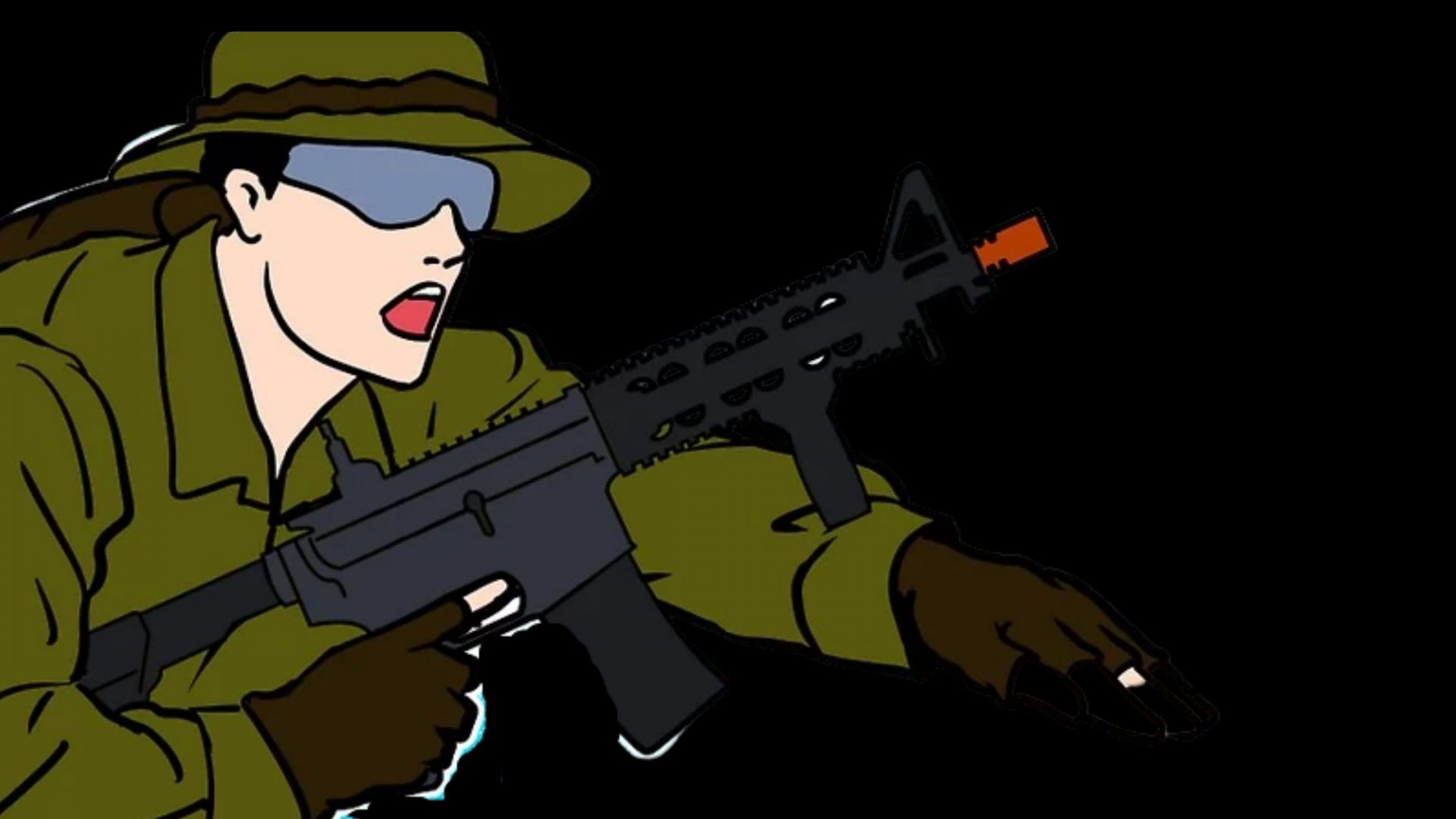 Planning to team up for Airsofting event? If you are a regular airsoft player, you probably have. In many areas of the world, people desire to play airsoft but there are no teams to join as this game lacks in popularity in those areas.

How to find like minded people to form a team? What roles to assign each member? Who will do what and how. In order to address to all these questions, I am going to tell you all about making a team and its roles and requirements.

Mark my words “Your airsoft experience will be enhanced many folds by being a part of a well-coordinated team”.

While playing as a team players need to use radios to coordinate attacks and play different roles. An Airsoft team is a group of 6 members who are devoted to playing airsoft.

How to join an Airsoft team?

This question has been sked numerously. The answer to this question is within ourselves, we can simply search “Airsoft groups near me” or airsoft teams to join and you can join the Airsoft club of your choice. You can also contact your friends or the people around you, they might know someone who runs an Airsoft team.

Forming an airsoft team is a difficult task. The easiest way to form an airsoft team is to gather like-minded people who play airsoft. If you already play the game with some friends then it would be easier for you to form an Airsoft team. If there are not enough members then search social media for finding new members.

Once you have gathered at least 6 members who are enthusiastic and devoted to playing the game, then what are you waiting for? It is time to form a team and start practicing.

Leader Of The Team:

Once you have made a team it’s time to decide the leader of the team. Every team is headed by a leader or a captain. The leader should be the most responsible member. The leader gives orders, guides his team members, and makes decisions. Every other member of the team obeys his orders or decisions.

The leader of the Airsoft team should be the one with great experience and the best skills. There is only one leader of the team who ensures that every member is on track. A leader is someone who has previously been a member of a professional Airsoft team or simply someone with a lot of experience and finest skills. The team leader is capable of analyzing situations, identifying problems, and solving the problem. He should be capable of even solving the most critical problems

Picking a specific airsoft role is as important and crucial as choosing your weapons for the game. The ideal role for you can be determined by a variety of characteristics, including your body type, fitness level, experience with specific guns and playing styles, and more. If you are playing the game with your friends for quite some time you probably know their interests and personality. The roles in Airsoft are allocated to the players following their personalities and interests. If the team members are new I recommend you to play with them until you get to know each other’s passion.

Another way to assign roles is to make sub-rolls. Imagine that everyone is a support gunner. Aside from that, you use someone’s strengths and assign them additional duties that require them to employ their strengths. For example, someone’s strength is long-range shooting then he can also play the game as a sniper.

Following are the roles in Airsoft :

Sniper is probably the most attractive role amid all. To be effective, the Snipers will spend extended amounts of time examining the area and analyzing their next shot, thus the suited player must be patient. The most of the time, you must remain undetected by the adversary. There should be 1-2 snipers in your team. If there are more than 10 members then you can increase the number of snipers.

A sniper rifle is important for an Airsoft sniper. The sniper’s rifle must be highly advanced. A sidearm is also required.

When I play Aircraft I enjoy the role of a sniper. Although it demands patience, I enjoy observing and evaluating my opponent’s moves.

The most essential unit of the team is the rifleman. The rifleman is the largest in number. They should know all the basic rules of the game. They are in charge of basic movement and combat movements during missions. They serve as the foundation for infantry tactics. If you have more than 10 players, then you should have 4 riflemen.

The only weapon necessary is a rifle, as the name implies. A rifleman’s main armaments are assault rifles like the M-16 or AK-47, a sidearm, medium armor, and a radio to communicate. Assault rifles are commonly utilized because of their enticing medium to long effective range and portability.

Recons are the team members who lead in the front but not as a leader. It is the most skillful part of the game. They also gather information from the enemies or opponents. They take the charge.

The weapons they require are something like an MP-5 and of course a radio to communicate.

They play an important part in a variety of Airsoft games. They provide the team with firepower when they are pressing ahead or falling back. The support gunners open heavy fire which forces the opponents to take cover and the team members get time to act accordingly.

Support gunners add to the game’s excitement and difficulty. It is a comparatively unique position. These players need to be strong to handle heavy weapons for a long period of time.

An assault airsoft rifle that takes in heavy magazines is included in the weapons needed in this role.

The designated marksman stays in front and strikes the huge targets that are outside the rifleman’s range of fire.

Marksmen are capable at maximum distances of 500/600 meters quickly and accurately. If you have 2 designated marksmen, then there is no need to have a sniper. You can change their numbers according to the game type and strategy

A designated marksman rifle is needed, which is longer than a typical rifleman’s rifle.

These are the hidden team members even more than a sniper, this is because they are sent to gather information from the opponents and to find out their tactics. Scouts should work with patients because they have to observe the opponents for long hours. In short scouts are the eyes and ears of the team.

They require a short Airsoft gun or a pistol.

It’s one of the less popular Airsoft roles. Grenadier is not much different from riflemen in terms of weapons

The main reason for that is cost. Among the Airsoft positions, Grenadier is optional. Because grenades are expensive, people don’t give much thought to being a Grenadier. Heavy grenades are used in this role.

Personally, I don’t like playing as a grenadier in airsoft.

It is an optional role in Airsoft. You can play without the healing options. Usually, an Airsoft medic does not carry heavy weapons because it does not kill its opponents, instead, its main target is to heal its team members.

An Airsoft medic carries a light weapon (optional) just to defend himself. There is no need for your team to have more than one medic.

If you have a small team, you may skip this step. This step is optional. I recommend, if there are more members in the team then a person with communication would be great for the team. The responsibilities of the radio operator include communicating where to go and delivering important information about the location.

Following are my suggestions that will help you to grow as a team :

It is not important to include each and every role mentioned above, it depends upon the size of your game or the number of team members you have. If you include all the rules, then to win from your team will be arduous.

This is the main determinant in becoming a pro Airsoft team. You will get to know about the interest of all the team members. The more time you spend with your teammates, the more you will come to know them.

We all have heard this famous quote “Practice makes a man perfect”. so, the only way to become a professional airsoft team is by practicing. Practice as much as you can, aim for practicing twice a week. practice code words, strategies, and code names. This will maintain the enthusiasm of team members, especially during game days. Coordination and teamwork is really important

If your team has 13 members or more, then it is ideal for you to have,

5 Riflemen in your team.

You need to decide on a group name and a group image. Select a Group name on which each team member agrees. The team name should be your identification. More importantly the name should depict your passion about the game.

You may also need a group uniform that will help you to recognize your team members in the field. I recommend you to select a uniform that is comfortable to wear because in long hours of gaming and practicing you should not get uncomfortable because of the uniform.

My recommendations for an attractive name for your Airsoft squad are written below:

In my opinion, these names are cool and unique. The name of my airsoft team is Lightning strike.

Communication With The Team Members:

You can communicate with other team members by using a radio to give them an update about the situation around you. Nowadays the radios are available in the market at very low prices, so even if you are on a low budget you can still afford radios for communicating.

Another way to communicate with your team members could be by developing your codes. My advice would be to memorize the codes and then practice them first. If in the middle of the game your radio stops working, then this strategy will help you a lot.

Communicating with your team members will help you to play the game more wisely.

Difference Between Designated Marksman And A Sniper:

Is there a distinction between a designated marksman and a sniper?

Another important question often asked by most of the players.

Yes, there are many reasons for that. Some of them are written below :

Also, there is a difference between the weapons they both use during the game. A sniper employs a bolt action sniper rifle, whereas a Designated marksman use a semi-automatic assault weapon with a scope.

A sniper hides from the enemy while the designated marksman does not use any kind of camouflage technique.

I hope you’ve gotten answers to all of your queries so far.