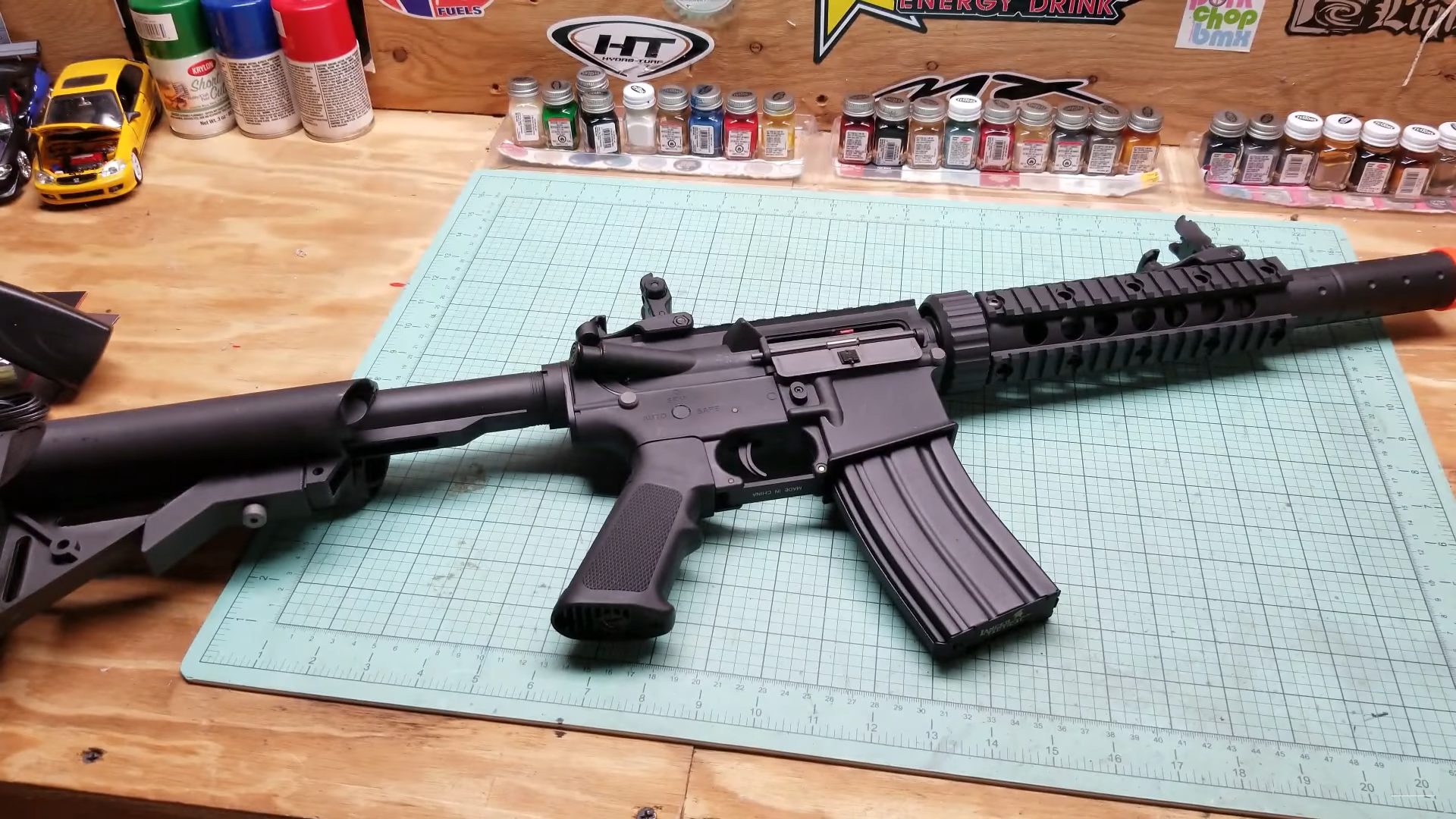 Good knowledge of airsoft weapons can improve your gaming efficiency, so get an answer to what does AEG means in airsoft?!

Airsoft is a competitive team game in which opponents eliminate each other using realistic airsoft weapons on a battlefield. There are different types of airsoft guns, but AEGs are the headers for their automatic functioning and long-range shooting performance. It is important to have a good understanding of weapons to perform like a pro, so I bring this informative article to all airsoft shooters who want to know what does AEG means in airsoft!

What Does AEG Mean In Airsoft?

There are five main kinds of airsoft guns, depending upon their functioning and source type, “AEG” is the most common. AEG stands for an automatic electronic gun that was first introduced in 2005 by a Japanese corporation called Tokyo Marui. The weapon stands as a leader in the airsoft weapon industry because of its automatic functioning.

An AEG comes with a piston pump and a spring. The primary difference that makes AEG distinct is that it does not include manual execution, as it comes with a rechargeable battery that supplies electric power to the spring system, to propel bullets. Don’t mess with your mind now! Next, we will talk about how it actually works!

How does AEG Works?

It is important to have a good understanding of the internal parts of a weapon to know how it functions because each component of an AEG gun is co-linked with the performance of other parts. Better insight into your weapon helps you in its maintenance and usage. If you are a novice, you will find this section useful!

An automatic electric gun utilizes three different kinds of energy: electrical energy, mechanical energy, and inflation or pneumatic energy. A battery (Ni-MH or Li-Po) or motor supplies electric current through a circuit which develops an electric potential and becomes a source of “electrical energy”. There are some movable components like “piston” which follow certain actions and become a source of “mechanical energy”. Once a piston releases, air pressure builds through the tank, rooting “Pneumatic energy”.

The modern design of airsoft electric guns is based on a mechanical system containing a motor with three gears. This gearbox is designed to stimulate a smooth conversion of electric energy into mechanical energy. When a shooter pulls the trigger button, an electric circuit initiates by the power supply, that engages with the series of gears subsequently. Then, the third or last gear connects to the piston and causes the spring to compress. Once a piston is released into the tank, the gun fires! This is the point when mechanical energy is converted into inflation or pneumatic energy.

There are different factors that demand your prior consideration while purchasing an airsoft gun, so I decided to give you a quick glimpse of those parameters. The speed or velocity of an airsoft weapon is the primary factor because it decides how far and fast a gun will shoot, causing a noticeable impact on your game experience. In terms of AEGs, the FPS rate is quite promising when you have a gun in your hands, not a pistol.

The exterior and interior side of a gun is substantial. Electric guns are operated with batteries that are not resistant to weather fluctuations like high temperature, moisture, etc. Based on this limitation, I suggested you keep some extra batteries with you to avoid any troubling situation.

On the interior side, AEGs do have not as much recoil, making handling and rapid firing more convenient. If you have an AEG you will be more competitive and fast on the battlefield than any other gun. That’s why I highly recommend electric guns to front-line shooters. Over that, it has three mags: high, low, and real cap. If you’re an intermediate, 450 round high cap mag is more than enough to compete in battle. This luxury is only facilitated by AEGs.

AEGs call for constant maintenance, so I suggested you all keep a Teflon tape and good quality lubricant in your kit. As I said before, an automatic electric gun comes with a gearbox, and most improvements are required within or around it. You will need a basic toolset to upgrade the wirings or electronic system.

Does AEG have recoil?

Recoil in a gun means a kickback feel when a weapon shoots a bullet. This force pulls you a little backward, creating a realistic vibe for the shooters. AEGs have recoil but not as much as GBBs. After pulling a trigger, the player will experience a kickback which is not very powerful because of course, at the end of the day you’re not firing with a real gun. I always prefer AEG guns not pistols to feel the realistic force.

Which is better, AEG or GBB?

AEG stands for the automatic electric gun, which is powered by the electric current supplied by batteries, while GBB stands for gas blowback gun which is sourced by gas supply. GBB guns are more realistic, have higher recoil systems, and cost you more. In contrast, AEGs are affordable, fast, easy-to-handle, and less realistic. Shortly, I found AEG better than GBB.

What is the best airsoft AEG on the market?

Your shooting performance would become better with automatic electric guns because these are super-fast, long-range, and convenient to use. These guns are efficient yet affordable as compared to other airsoft gun types, which is incredible. However, having a better knowledge of the interior parts of the weapon you’re using will make maintenance and use effortlessly. So, I tried my best to make you aware of that!